If a picture is worth a thousand words, then a video speaks volumes; and the most epic and honest mobile home commercial ever made can show you in about a minute just how easy it is to cash in those empty beer cans and make a down payment on a “T T” starter home.
…looks like there’s a price range compatible with almost every budget. And while it may be one thing to agree upon a price for your new abode with a spit and a hand shake, it’s quite another to get a loan from the bank to close the deal before all of the kids move in - especially when loan underwriting guidelines are so excruciatingly tight, as any weak economy would dictate.
Not that getting a mobile home loan was ever very easy, even in the best of times. Perhaps it’s because banks just can’t decide what kind of loan they’re actually making, so the asset ends up on their books in some catch-all general ledger account called “Deliverance Loans”.
It always seemed like a ‘collateral conundrum’ to me since a mobile home isn’t really a house that is permanently affixed to a foundation in the space where it’s parked – ‘parked’ being the operative (or it is inoperative?) word here. Nor is it really a car (even though it’s parked) in possession of a built-in engine powerful enough to move it down the highway autonomously. In summary: A mobile home is basically a trailer-type movable living unit that can be relocated anywhere on a whim and a belch or occasionally on a twister; and this bestows upon it an unsavory classification which, by its very nature, creates a special lending niche with a tailored style of underwriting.
Given my long, and perhaps not-so-illustrious, career in the world of real estate finance, it was inevitable that over the course of time I would find myself in circumstances where I was forced to learn how to do something I never thought I needed (or wanted) to know. Reflecting on my days of “living the big sky life”, I confess that learning how to close a mobile home transaction was one of those occasions.
Special loan niche or no, most prudent lenders like to at least appear as if they’re underwriting loans that hide behind the three “C’s” of lending: Credit (“T T” mindset), Capacity (size of welfare/disability check), Collateral (the Trailer/MH).
Back when lenders had a shelf full of underwriting books (now everything is on-line), there was usually a book for mobile home loans as well. Although I never had any proof (and no one ever copped to it), I was convinced a second book existed - a secret book that was locked up in some back office which contained the real guidelines for making a mobile home loan, or “T T” loans as they came to be called.

Based solely upon personal observation, I wouldn't have been surprised if excerpts from that secret book had faux guidelines that looked something like this:

Since discrimination is prohibited by law, every requirement itemized below shall apply to each Borrower regardless of gender. Should the following conditions not be met, exceptions will be reviewed and approved on a case-by-case basis.

Photographs of each Borrower shall be included in loan file under review, and shall give evidence that supports two out of three of the following requirements:

A. Each Borrower must have a minimum of two tattoos. Said tattoos shall be displayed to best advantage in photograph(s) of Borrower posing in the traditional (what once was white but is now beer stained and/or yellowed with age) wife-beater tee-shirt.

B. Photograph(s) must give evidence of an official mullet haircut. (This appearance assures underwriter that Borrower is all business up front and the party will stay out back). Underwriter may take exception to the mullet requirement should hair otherwise reveal re-growth/dark roots of not less than 1” sprouting from a ratted mass of over-bleached blonde hair, OR a large smattering of wiry grays intermixed with stringy and/or dingy hair.

C. Photograph(s) must give evidence of yellow (brown or black OK) and/or missing teeth, any silver/gold capped front tooth shall be deemed compliant; AND the hardened yellow fingernails that can only be acquired from years of smoking filterless cigarettes. Chewing tobacco stains on scraggly facial hair may replace yellow fingernail requirement with underwriter approval.

A. MH Trailer may be parked on top of blocks, log stumps, old tires, beer kegs or anything recycled from the local dumpster (think green). Level floors are not required, and Borrower is free to design a contoured floor slant that allows beer cans to roll from the icebox to the couch undeterred.

B. MH Trailer may be parked in a facility that has met all pre-fab specified standards and received prior underwriter approval. Otherwise, MH Trailer must have predominant access via dirt road (insured access optional), and should be parked in one of the following ‘Bufu's’: i) ‘Desert Bufu’ will give evidence of sagebrush acreage with tumbleweeds, scrawny cactus, and swirling dust devils; and ii) ‘Bufu in the Woods’ will give evidence of bark beetle and tick infested forests dripping in Spanish moss, and surrounded by swampy pastures and patches of bear grass.

C. MH Trailer shall not be required to have a sanitary-certified water supply, flush toilets, or a functioning septic system. Cesspools and outhouses shall be deemed compliant. Dried up wells on property OK.

D. MH Trailer shall not be required to have a code-approved electrical supply. An electrical line that has been properly hot-wired from the big transformer running through the back of the property or along the gully shall be deemed compliant.

E. MH Trailers (single-wides) built prior to 1969 that have corrugated side panels rippled with asbestos are considered acceptable. All MH Trailers are required to be officially registered with the proper state vehicle licensing department, and must display a personalized vanity plate approved by underwriter. Some examples of previously approved vanity plates are:
“imahick”, “heehaw”, “tattme”, “Tbagger, “TTtude”, "TSquare".

“T T”, acronym for “TRAILER TRASH”. n. Archetype.
Popular opinion tends to stereotype those belonging to the “T T” culture with a double-widely accepted description that more or less pigeonholes a fairly diverse group as being comprised of those who “seem well-suited to residential life in a mobile home park and are distinguished by poor hygiene, foul language, slovenly or slutty clothing, and general ignorance. Recreations include drinking malt liquor in lawn chairs under tattered R.V. awnings and teenage pregnancy.” (urbandictionary.com). And “poor white people living in a trailer park in the U.S., especially the South.” (dictionary.com).
While these distinctive characteristics are frequently evident in those who boast the purest of “T T” pedigrees, they can be limiting in scope.
Certainly appearance, behavior, poorness, and location all make uncontestable contributions to the “T T” prototype; however, like those of the “Moldy Old White Bread” persuasion, the determining factor of a true “T T-ite” inherently comes down to mindset. The trailer is merely an accessory.
A “T T” mindset is an inbredded thing, and more than skin deep, or skin color for that matter. You can take the trash out of the trailer park, but you can’t laser off those K-Fed tatts without leaving scars. And no matter how you dress it up, the “T T ‘tude” can’t stay suppressed for long.
Evidence of a “T T” mindset will oftentimes emerge in ordinary conversation when a “T T-ite” unwittingly lapses into the “T T” mother tongue which has over time evolved into a drawling language filled with double negatives and contracted half words; and is something that, well, just can’t be taught in schools.
It’s been suggested that a good portion of the “T T” population traditionally lives and breeds in the South, but anyone who’s seen the "Jersey Shore" would know this to be a misconception. The red states may indeed prove to be fertile territory for “T T” culture cultivation, however, their borders are simply not enough to contain the mindset or keep it from spreading.
And there just ain’t no more to say, except maybe...
Adjectives: T-squared, trailericious, trailerlectible, trailerflashy, T-T-dacious 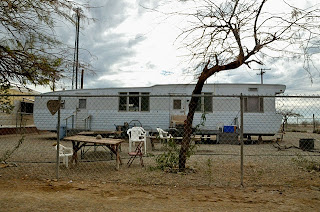 The Eyes Have It

Here's me looking at you! 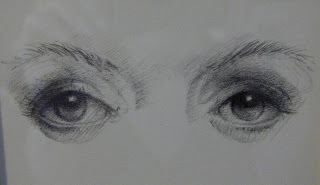 © Copyright by Artist, KAd Collins.
To find out more about the artist, go to ArtistKAdCollins or KAd's Etsy Studio.
Posted by DK King at 12:21 PM No comments: