It’s the 1950’s. A man sees a cigar-shaped UFO, subsequently becomes involved in receiving channeled messages from intergalactic “human” beings, and then, within hours of his death, writes ‘Border to Infinity’ as the final entry in his personal journal. What does it all mean? And could these events be interconnected?

The Galactic Transcripts will take you on a journey that is as provocative as it is mysterious. Its thirty-seven transmissions are channeled from a non-earth, alien group who identify themselves as members of the Space Brotherhood – messages imparted by representatives known as Monka, Korton, Traenor, Klala, Hatton, Lalur, and Soltec.

Learn what the Space Brotherhood also has to say about other organizations such as the Galactic Counsel, Confederation of Galaxies, Counsel of Lords, Solar Tribunal, and the Solar Cross Foundation.
The Galactic Transcripts offer us descriptions of other worlds, their inhabitants, morals, ethics, and histories. They even forewarn of the coming cleansing of Earth and the cataclysms preceding it. Other messages shed light on the original colonization of Earth, telepathic communication, the power of love, the program of the Radiant One, and much more.

Those who have read The Galactic Transcripts have found them to be life-altering, profound, inspirational, transformative. Will they have that effect on you? Open your mind and allow the transcripts to take you beyond the limitations of our world and into new, undiscovered worlds beyond our galaxy. 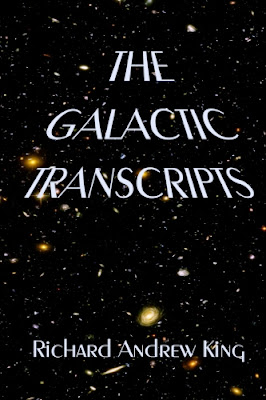 The quotation above was taken directly from the back cover of The Galactic Transcripts © by Richard Andrew King.

I've had the distinct privilege of working with Richard Andrew King on this amazing publication which was newly released on 27 September 2013, and I simply can't want for you read it!

Get ready to stretch your awareness beyond what you have been taught to believe and discover what life can be like among the stars ... even beyond our galaxy.

Get your copy today!! Paperback and eBook Kindle versions are now available at:

www.TheGalacticTranscripts.com
Posted by DK King at 3:24 PM No comments: