In the beginning was the lie.

This was no little white lie, but the very biggest of lies. A lie so colossal, in fact, that it couldn’t help but influence the smooth strategies of modern day copycats such as Adolph Hitler and his favorite propagandist, Joseph Goebbels, with its brazen mendacity and resulting manipulations.

From the moment I was compelled with a painful wail to open my newborn eyes, this big lie became the cornerstone upon which my innocent new life would be constructed. Brick upon brick, lie upon lie, whether it felt right or not, I built the walls of my house just as I was taught … like everyone else’s. 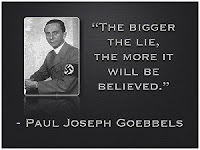 As I grew, I was thoroughly trained in how to fill my house with the “educated” perceptions, beliefs and behaviors of those in authority; those who were deemed superior to me; those who knew better than me because they were older, holier, wealthier, smarter, prettier, more talented or more famous; and those who I was told had power over me, my resources, my success, and my happiness.

Because the construction of my life and its maturing refinements appeared to somewhat conform within a socially acceptable blueprint, I believed my house to be relatively solid for close to half a century.

Then something happened to shake it all up. Some would say I had a wake-up call or perhaps an “A-HA” moment of epiphany. Personally, it felt more like a “consciousness quake”, an inner earthquake so jarring in its subtlety that it rocked my foundation to the core and left behind an irreparable crack before I even knew what had hit me.


And this concealed crack began to rapidly spread ...