The Rock of Gibraltar Bows to the Strong Winds of Change

I’ve known some rough years. I’ve known quite a few bad patches too - some of them admittedly self-created, and the rest, well, perhaps not so much so. And while many of my life-long friends have observed with occasional comment how challenging my life appears to them, it’s the only life I have right now and I feel an inexplicable moral obligation to make the best of it. I confess though that I do at times feel as if I’m a walking testament to the veracity of “what doesn’t kill me makes me stronger” – Lord knows I’ve muttered those words to myself like a mantra long enough to almost be convinced it’s true.

The reality is that I don’t do victimhood or martyrdom very well. Nor do I have much use for the notion of “suffering for suffering’s sake.” Frankly at this stage, I think if I hear one more person offer me up (what is usually meant to be a compliment) some well-intended words of twisted encouragement about how strong I am because of what I’ve endured as if that’s supposed to be enough to keep me going, I think I’m going to puke.

In my experience, the development of inner strength is directly related to how one navigates through the land mines of life and subsequently processes through the post-explosion wounds and emotional compression that is the aftermath … not unlike that which transpires during the formation of a diamond or in the tempering of fine steel.

I believe most people really do try to pave their individual journeys around the wheel of life with good intentions as they maneuver through it all in the best way they know how, the way they’ve been taught. Yet when life hits us between the eyes with a painful and profound compression event which we frequently have little or no control over, it seems the most expeditious and effective way we have as human beings to alleviate our own suffering while simultaneously strengthening our character is to voluntarily change our perceptions, our belief systems and/or our way of being – whatever that entails.

The process of change is very personal and often irreversible. Although change tends to be frighteningly hard for most people, I personally don’t find the actions associated with change to be especially devastating … not anymore anyway. The devastation in my experience comes not from the act of change itself, but from the illusion that has to be shattered in order for the act of change to become a healthy necessity. 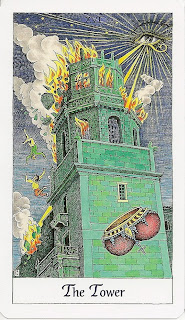 I call these illusion-shattering land mines “Towers” because, like the blind-siding shit bombs that they are, these explosions historically strike at my Tower with destructive purpose and without mercy. Upon impact, I know with trembling certainty that something deep inside of me will be violently ripped from my core as the rest of the world callously carries on unaware and unaffected by the gaping hole that’s about to be left in my soul. The feeling of anguish is almost indescribable. Yet it’s from this black hole that true strength is born. Go figure.

The day my excuse for a father narcissistically tried to defend his lifetime of abusive bad behavior by insinuating he’d done me a favor and deserved some credit for making me strong, was the day I knew it was time to release any illusion I’d ever held with regard to his place in my life. It was also the day I officially resigned from my lifetime role as the 'strong one', aka The Rock of Gibraltar. This shit bomb of a “Tower” was clearly a monumental one, yet the changes I ultimately made because of it, a blessing.

I quickly discovered that people get fighting mad when the rules of a relationship are unilaterally changed and new boundaries are established, particularly when their self-serving agendas have been abruptly obstructed in the process. Resigning from my role as everyone’s Rock of Gibraltar meant that my strength could no longer be used against me or taken for granted. It meant that I could no longer be held to a higher standard simply because I was stronger. It meant that the emotional emergency room I’d generously sustained for decades was permanently shuttered to those who had abused or taken my strong support for granted. And above all, it meant that those around me could have the opportunity to step up and find their own inner strength. Yes, a blessing indeed.

This being said, all I can say now is that the Thanksgiving holiday finally allowed me the opportunity to catch my breath long enough to recognize that the last 12 months have been one of the most difficult years I’ve known in a very long time; the last 3 months, especially so. Talk about feeling overwhelmed by a blitzkrieg of shit bombs. I suppose Winston Churchill was feeling much the same way when he said, “If you’re going through hell, keep going.” Perhaps his brusque quip is just a poignant way of reminding me that “this too shall pass.” 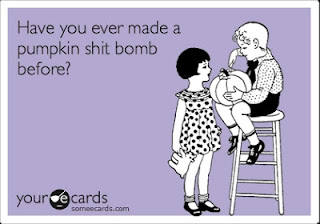 Well, what stone remains of this former Rock of Gibraltar has suffered markedly from the eroding effects of emotional compression, and the cracks are starting to show. It must be time to let go of everything and bow once again to the strong winds of change…