Rocking It On Holy Ground

The bucket list adventure I shared with Eileen last fall did not end with a little ferry ride from Mallaig to the Isle of Skye on All Saints’ Day. We had bigger plans for the second half of our trip. Giant plans, in fact - plans so gigantic that if we could’ve followed in the giant’s footsteps straight from Fingal’s Cave on the Scottish side of the Causeway to get there, we would have.

Our determination to rock it big on holy ground required instead that we fly into Belfast and drive to the northern shoreline of County Antrim to reach our landmark destination, the Giant’s Causeway - one of the windiest points in Northern Ireland. It was November 3rd, and it was (not surprisingly) a very blustery, cold winter day.

To step out of our car was to step headlong into a forceful wind that was so biting it made us question our reason for being there in the first place. Just how bad did we want to do this? Eileen gave me every opportunity to back out, but I’d told her from the beginning that I was in, and in I was. So we sucked it up - faces frozen in place from the icy cold - and leaned into the wind that seemed determined to knock us over in the parking lot as we strived to reach the visitor center with satchels in hand.

Inside that suitcase full of costumes Eileen had been determined to schlepp across several continents were two pink morph body suits, pink ballet slippers, and frosted long haired wigs for this very occasion - but an on-site costume change would be required. We giggled like two giddy schoolgirls behind our respective bathroom stall doors while we struggled (over many layers of long underwear and as much insulation as we could manage) to change into those pink morph suits. 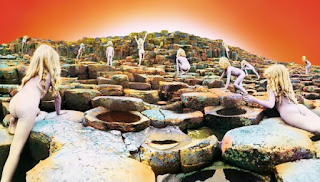 Once changed, we walked out of the bathroom camoflauged in sweatsuits, wigs securely safety-pinned to the hoods of our morph suits. No one even noticed that we had transformed ourselves into seasoned nymphs intent upon shamelessly re-creating an amazing album cover from our youth in front of a hundred tourists, many of whom were too young to get it. The album cover, of course, was Led Zepplin’s “Houses of the Holy.” 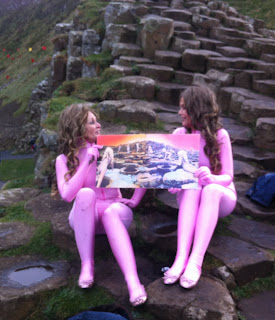 Conceptually we may have been dating ourselves, but we weren’t looking so old once we stripped off our sweatsuits and began scrambling over those slippery octagonal stones against heavy winds and seaspray like a pair of performance art monkeys … monkey see, monkey do. 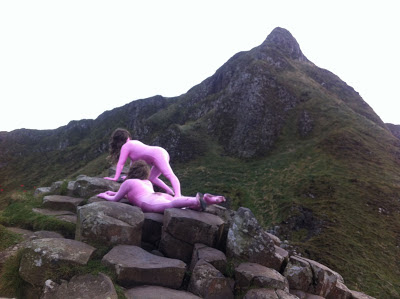 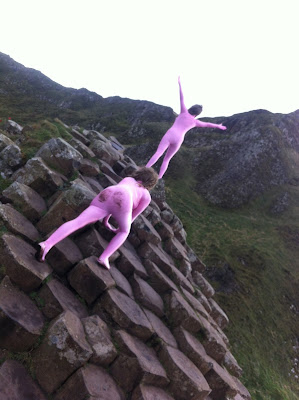 The latter half of 2012 may have seen me delicately dodging the onslaught of shit bombs life had seen fit to lob my way, but in hindsight I can now admit that it wasn’t all bitterness and gnashing of teeth. My hard-earned inner strength probably had something to do with that, but I suspect my cynically optimistic nature (thanks to a hearty Irish gene pool) had everything to do with putting things into proper, albeit sardonic, perspective. There were, in truth, a few sweet moments sprinkled over the top of all that sour.

One highlight was an overseas bucket list adventure I’d been invited to share with a dear friend I’ve known since grade school. Eileen Dennin, the instigator and bucket list benefactress, had always wanted to spend Samhain in the Scottish Highlands, more particularly at the castle that seemed to share her name, the Eilean Donan Castle.

To keep with the theme she’d envisioned, she had stowed a separate suitcase filled solely with the costumes we needed to dress as ancient Celtic druids prepared to perform ceremony on the shores of Loch Duich under Halloween’s misty moonlight. The castle’s security cameras undoubtedly captured our hooded figures walking solemnly over the island’s stone bridge with glowing candles in hand as we made our way across to release our jack-o-lantern sky balloons beyond the castle's seawall into the darkness. 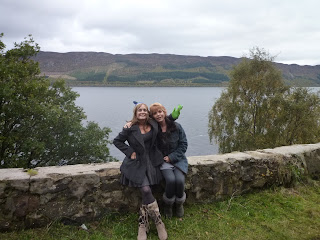 Storming the castle was no mean feat. It took some serious planning, and of course, a 25-mile scenic trek along the infamous Loch Ness with little expectation of a real life Nessie sighting. That’s OK. These two Beanys simply brought their own Cecils.