Living The Big Sky Life: Cater To You

My girlfriend, Soho, was a frequent guest at Chez Montana. One year saw her staying with us so much that we basically considered her a permanent part of the household. She entered my life within weeks of my arrival in Montana, and she was there for the duration and thereafter. She was, in fact, the only true witness I had to all that comprised my big sky life, and much to Chef’s chagrin, she was often the only reliable reality standard by which I could measure my sanity.

Whenever she’d stay in the green room in our home on the range, Soho typically made it a point go into the office with me every morning where she spent the days working her fashion business in Florence, Italy out of the back room of my title office. This scenario made her daily exposure to the locals and the way business was done in Whitefish all the more inevitable. What I saw, she saw. Who I met, she usually met. She was a firsthand observer of how I was treated and by whom, and this caused her to form very strong opinions about who she considered good and who she considered bad. She quickly developed a highly protective sense of who she deemed worthy of me and who she deemed unworthy, and frankly, more than most seemed to fall into her unworthy category.

And she used me to express her opinions about this in a very unique way.

Not long after the catering business had become fully operational, Soho left Whitefish to handle some business in Italy. When she returned to our home several weeks later, she handed me a blue velvet-coated ring box she had retrieved from the safe in her house in Florence and said, “This is for you. I want you to wear this ring every time you serve hors d’oeuvres to these people who are beneath you so that they can't help but know you are better than they are with each morsel you offer them.” Inside the box was a 14K gold ring set with a huge (¾”h x ½”w) emerald cut topaz citrine beautifully embellished with several small diamonds. Apparently the ring was to say it all.

Because she was part of our household, Soho couldn’t avoid participating in the planning stages of our catering business (albeit cautiously), and aside from Scope, she was the only other person who knew about “The Door.” She watched me pull double shifts for months when, after a full day of working in the title office, I’d come home at night to work the demands of a catering business. The weekends offered no reprieve or day of rest either, merely double the duty, because the majority of our catered functions were scheduled on the weekends. Whether it was marketing, office business, contract preparation, chopping and dicing in the kitchen, washing dishes, or serving at a function, my assignments and duties were numerous and never ending. As were Chef’s. 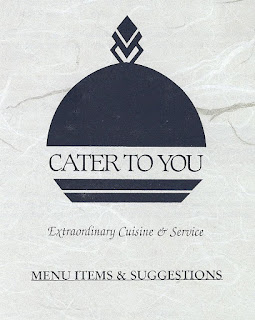 It took us months to settle on the perfect name for the new business, and the winner was: CATER TO YOU. As soon as the name for our company had been selected, I paid a quick visit to my dear friend and favorite Artist, KA Collins, for the logo design, and wasted no time in putting together "CATER TO YOU" marketing materials and event contracts. The only thing that got in my way was, believe it or not, Chef.

I believe part of the problem was that he’d never been in business for himself as I had. It seemed that his lack of experience fueled his ignorance when it came down to how common business principles can be universally applied to almost any endeavor. Every time I’d try to openly walk him through the developing nuances of our business operation as I was setting it up so that he would understand what I was doing and why, he’d regularly criticize and challenge the majority of my efforts, sometimes to the point of undermining. There were more than a few occasions when I had to hotly remind him that when it came down to running the kitchen, I was of the opinion that he reigned supreme which thereby obligated me to totally trust him to do what he did best. Why couldn’t he offer me the same courtesy when it came down to allowing me to do what I did best in running the business?

After I’d left Montana for good, he called me one day and humbly admitted that he didn’t realize, until I wasn’t there to do it anymore, just how much I’d done and how well I’d done it. It was an empty vindication however –too little, too late- because by the time he’d gotten around to acknowledging the significance of my contribution, I was long gone and he’d fatally driven the business into the ground (within three months of my departure, no less.)

No sense crying over spilt milk. It seemed to me a better solution under the circumstances was to simply slip on that glorious ring, go out into the yard, scoop up a big bowl of freshly fallen pristine (white) snow, and promptly blend it into something worth drinking ... like a strong margarita. Ole'!