Living The Big Sky Life: Dragging Out The Dusk

A continuation of “In The Beginning, There Was Light” …

In the months that preceded my move to Montana in May 1992, I noticed that those around me always seemed to have the same 3-word response whenever I’d mention my pending move. And those 3 words were never the expected, “it’ll be beautiful” (spoken with a *wistful sigh*); but a very disheartening, “long cold winters” (spoken in a ~gloomy groan~).

Not the case with my mother, however, who simply asked the question, “Does it get hot in Montana?”

Chef was quick to snort in disdain at my mother’s simple question, or at any suggestion for that matter that the weather in Montana might ever be less than perfect, let alone hot and miserable. It just so happened that my little urban-mobile came standard with air conditioning, but our 100-year old Unabomber bungalow in town clearly did not. It was nature’s cross-breeze or nothing.

Well, my mother got a real-time answer to her question the very moment she stepped out of my air conditioned car that first day of July 1992, and hit a wall of 100F-degree heat. In fact, the record-breaking daytime temperatures hovered just above 100F degrees her entire visit and beyond. It was funny to watch how quickly Chef swallowed his contempt for all things air conditioned as he volunteered to drive my car everywhere he went that summer.

Now that we all knew with certainty that it did get hot in Montana, staying cool became a top priority; and the only place to find relief from the heat was with the fishes in Whitefish Lake. My daughter had wasted no time in figuring this out, and she’d made it a point to spend those long hot days on City Beach swimming with every other kid in Whitefish. ﻿﻿
Now I don’t do lakes. The very thought of lake-bottom sludge oozing through my toes and tullies swirling around my legs gives me the creeps, and the only way I was getting into that lake water was on top of a floating device. At this point, there were only two plastic rafts left in town, and my mother and I found them in some back corner of the Ben Franklin store on Central Avenue. Side note: Several months later, that Ben Franklin Craft Store was completely incinerated in a 5-alarm fire which took out half of the west wide of the block between 2nd and 3rd Streets, including an attorney’s office. It was hardly a surprise considering that the store had been stocked like a poorly lit hoarder’s garage. Cause was later determined to be an electrical short that sparked and ignited surrounding debris. Oh duh.﻿﻿﻿﻿


﻿﻿Inflated rafts in hand, the two of us managed to push off from some rocks on the eastern shoreline and float out onto the lake far enough to consider jumping in without risk of hitting bottom or getting tangled in tullies. We realized, however, that the water was deceivingly refreshing only on the surface, and anything deeper than an inch was basically untouched by the beat down heat and the equivalent to glacier water. So we floated along the top to avoid hypothermia and did hasty limb dips when the heat on top became unbearable. Good enough for me. ﻿
Because Whitefish was so close to the Canadian border, my mother thought it would be nice to take a day trip into Canada. Without any real plan, we casually left around noon one day expecting to be back around dinner time. My daughter didn’t want to go and stayed behind in Whitefish with her friends at the lake, while Chef worked at being a chef up on Big Mountain until midnight. We entered Canada on Highway 93 sixty miles north of Whitefish at the Roosville British Columbia border crossing with nothing more than a AAA fold-up map. That means no cell phone, no GPS, no access to anything akin to 21st century technology now considered commonplace.

The Canadian border guard asked us where we were going. I turned to my mother and asked, “Where are we going?” It was her idea after all.

She thought for a second, then leaned forward and said, “Banff! I want to go to Banff.”

The border guard leaned in to look at her before responding, “So you’ll be in Canada for several days then?”

Oblivious to the cars lining up behind us, my mother, in classic form, started in on how disappointed she was about not having the opportunity to see Banff after everything she’d read about it. She kept asking the border guard if he was sure we didn’t have enough time to go to Banff and still make it back in time for dinner. Every once in a while, even now, the subject of Banff comes up with a little tinge of remorse in her voice. The border guard obviously knew his country and Banff was out of the question that day, so we settled for driving around the Canadian side of Glacier National Park, making only one pit stop at The Prince of Wales Hotel in Waterton.

After driving more than 9 hours, we barely squeaked back into Montana 20 minutes before the Alberta Chief Mountain border crossing closed at 10pm. The unnerving part in all of this was that we didn’t even know that the borders had a closing time. Chief Mountain was on the east side of Glacier National Park and the area very remote. Had we been locked out on the Canadian side, our only re-entry option would’ve been to wait until the border re-opened at dawn.

Dusk was in full swing when we re-entered Montana at Chief Mountain. By the time we entered Glacier National Park, the sun had disappeared behind the glacial peaks of the Rockies and put a permanent end to the daylight as we made our way home along the Going-To-The-Sun Road. It was 11pm when we finally pulled into the driveway. My daughter was watching a movie and had barely noticed our return. Chef was still at work and never even knew we were gone.

As my mother and I sat down to a late dinner that night, I realized just how subjective ‘dinner time’ could be when the dusk was dragged out late into the night.

Living The Big Sky Life: In The Beginning, There Was Light

Right about the time the summer solstice was serving up its annual offering on the longest day of the year 1992, I found myself becoming irrationally upset when the evening skies had the nerve to go dark at 11pm, thereby forcing me to throw down the gardening trowel and call it a night.

No matter that it was a good hour past the town’s nightly curfew alarm. After living in Whitefish for only three weeks, I’d already grown deaf to the screeching 10pm ritual of that firehouse curfew alarm. I’d also grown greedily accustomed to the longer days my new northern latitude made possible. 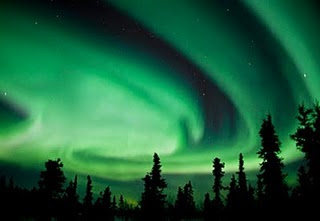 A definite perk in my opinion. Of all things Montana, I think the long days of summer were my favorite thing. Those extra hours of daylight always had a pleasant way of giving me the illusion that I had more time at my disposal. Frankly, all it took was one winter consisting of seven interminable months of sun deprivation and long freezing nights that began around four o’clock in the afternoon to convince me that the extended summer sunlight was THE highlight of big sky country - Northern Lights notwithstanding.

It was the first of July, and five weeks into my big sky life, when I got a phone call from my mother who was staying in Salmon, Idaho. She had just finished up a white water rafting expedition down the middle fork of the Salmon River, and wanted to pop over to Montana for a visit – her first visit to big sky country. We decided that I’d make the 150 mile drive south from Whitefish to Missoula to pick her up at the entrance of the Missoula Mall where her rafting group would drop her off on their way through town.

Even in those days before every commoner had a cell phone or any efficient way of communicating while en route, it never crossed her mind that I wouldn’t show up, let alone have a problem finding her in a city that I’d never been to before. Her group wasn’t so confident and kindly waited with her until I arrived. They were visibly impressed when I drove right up to her as if by some kind of mother-to-offspring osmosis. And on time I might add. Only to turn right around and make the two and half hour drive back to Whitefish, and we still had eight more hours of daylight left to while away in the middle of a heat wave.

I learned early on that getting to Whitefish was never very easy, even in the best of seasons. Glacier Park International Airport in Kalispell was the only Flathead Valley option when it came to air travel, and there were just two airlines (Delta and Alaska Airlines) offering regularly scheduled flights that primarily included one departure in the early morning and one arrival at midnight. Basically, first out - last in, and a Delta Salt Lake City layover always sandwiched in between. Kalispell’s airport had the bad habit of getting fogged in like a San Francisco wannabe, which created frequent landing challenges for those midnight arrivals. When this occurred, Delta’s preferred resolution was to land its planes in Missoula, transfer all passengers and luggage onto several large tour buses, and bus everyone up to the airport in Kalispell. ETA was usually about 3:30am.

Although this happened to me the very first time I flew up to Whitefish pre-move, my mother got to know the routine pretty well in the four years that followed. Fortunately she was a seasoned traveler who took detours in stride. I recall her especially enjoying the one midnight bus ride she had with John Lithgow sitting across the aisle from her. Lithgow had a home in the area and was often spotted around the valley, so that same trip also saw her running into him again at the movie theater in the Mountain Mall. 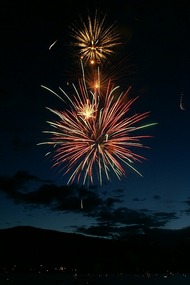 The 4th of July fireworks celebration around Whitefish Lake that year seemed to be another one of my mother’s standout moments (she still talks about it), even though the show didn’t start until dusk, nigh 10pm. She seemed to like the way everyone casually meandered up to City Beach with their lawn chairs in hand to socialize and partake in the celebration of our nation's independence with a choreographed fireworks extravaganza launched from a barge anchored out on the lake.

I later realized how lucky she was to have actually witnessed the fireworks display on the day of the 4th since apparently it wasn’t uncommon for the show to be postponed to the 5th whenever nature's lightning storms insisted on blowing the man-made light show out of the water. Violent thunder showers on Independence Day had a way of dampening patriotic spirits with the prospect of getting struck by lightning, hail, and any other 'Henny Penny' deluge that might fall from a tumultuous Rocky Mountain sky in July. 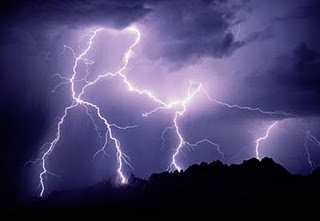 To Be Continued ... “Dragging Out The Dusk”

Living The Big Sky LifeTM
© by DK King
Posted by DK King at 12:40 PM No comments: