It takes all sorts to make a world, yet the smaller the world, the smaller the margin for those deemed to be out of sorts. At least that’s how it seemed to me. But it’s not as if what happened around me in small town Whitefish was really any different than what was happening anywhere else in the world. It was simply more encapsulated, more magnified.

Whatever our sort may be, the world’s machine continues to turn with little heart or without letting a little thing like inequity get in the way. Life goes on and the business of living right along with it. And so it was with my work-a-day-world and the demanding flow of escrow files that continued to ceaselessly cross my desk during my big sky incarceration. 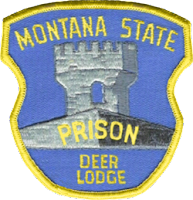 A snapshot of that incarceration would’ve likely shown me onerously confined to my Whitefish title office with a burdensome ball and chain, but I had one seller client who knew what real life incarceration looked like from the inside - and I’m talking the big sky big house here. You know, the state penitentiary located just outside of Deer Lodge.

This particular escrow file involved the sale of a large tract house in an established neighborhood south of Whitefish off of Highway 2/LaSalle Road. The transaction started out normal enough, meaning the real estate agent brought me a signed sales contract with no extraordinary conditions, and Joan set up the file by ordering the prelim with our Flathead County Title branch.

The next day I received a phone call from Clyde, the title officer who’d been assigned to prepare the title work I needed to close the transaction. In that deep baritone voice dripping with the dry wit and sarcasm he was known for, Clyde drolly began our phone conversation with, “I’m calling you about your Pedo-File.”

Pedo-File? What Pedo-File? Apparently this particular seller was no longer living in the house he was trying to sell, but was confined to a cell in the big house down in Deer Lodge. He’d been convicted of sexually abusing his young stepdaughter and needed to pay his legal fees with the proceeds from the sale of the house I was tasked with closing. I thought it strange that the contract made no mention of the seller’s unusual residence, let alone offer up instruction on how I was supposed to arrange for the seller’s proper execution of the closing package, which ultimately proved to be a little challenging.

Suffice it to say, the Pedo-File closed without incident or fanfare. Clyde’s title report came with a full copy of the court’s summary and conviction which provided me with far more information than I ever cared to know about the convicted felon who was now my seller. Every subsequent conversation I had with Clyde regarding this transaction heard us only refer to the escrow as the Pedo-File, never by name – which frankly I couldn’t remember today even under torture.

And then there was the 3-way property exchange instigated by a con-artist that had to be closed before 31 December 1994. The year-end deadline wasn’t highly unusual for this business when considering fiscal year end income tax issues, but the fact that the contract wasn’t delivered to me by the real estate agent, Ron Laurent, until Christmas Eve was a major issue. And it was the sloppiest and most poorly drawn up contract I had ever seen, hands down. How was I supposed to structure this complicated triangle of transactions without proper contract instruction or proper legal clarification/documentation for the commercial and 1031 exchange aspects of the deal that were not mine to handle?

I was told by Ron that no assistance would be forthcoming, just slap it together and make sure it closes on time, he demanded with little sympathy. He clearly had a large personal stake in the deal and it came in the form of a huge commission check, amongst perhaps other things that I didn’t care to know about. He pressured me mercilessly for updates by showing up at my office unannounced and unwanted several times throughout the day.

When most people are peacefully enjoying the holiday season between Christmas and New Years, I was having a full-on melt down and popping migraine medication like candy just so I could function well enough to close these deals under deadline as instructed.

Although it was not my responsibility to determine whether or not these transactions were in the best interests of the parties involved, it was incumbent upon me to make sure I didn’t complacently participate in something that was illegal. And while there appeared to be nothing illegal on the surface, I knew something wasn’t right. Everything about the contract felt suspicious to me, especially when considering that one of the parties to the contract was Kalispell attorney, John Lence. Like I said, the contract was the sloppiest and most poorly drawn up contract I had ever seen, and this so-called professional signed it that way?

I learned not long after leaving my big sky life behind that John Lence, Michael Allen (a Columbia Falls dentist,) and John Petersen (investment advisor and con-man extraordinaire) – all parties to this convoluted nightmare of a contract, were the trio that ultimately brought down Werner “Buster” Schreiber (aka Mr. B.S.) and his Mountain Bank.

Fraud, embezzlement, conspiracy … it’s the stuff of crime novels, yet there it was, sinisterly simmering beneath the secretive smiles of the small town movers and shakers. As for the tried and convicted trio, they too got to do time in the big sky big house right alongside the Pedo-File.

Living The Big Sky LifeTM
© by DK King
Posted by DK King at 8:27 AM