Living The Big Sky Life: As The World Turns

If all the world’s a stage, then drama must be the name of the game.

And far be it from me to argue with Shakespeare on the subject of drama, especially when I myself had once been typecast as a headliner on Big Sky Broadway in the post-deliverance dramedy now known as “Living The Big Sky Life”.

Once I’d managed to put enough distance between me and the cow town of Whitefish, it became easier to see one major reason why the story played out as it did: the more I persisted in playing the part I thought I was supposed to play, had been trained to play; the more dramatic the surrounding acts of my life seemed to get. Talk about not fitting in, and going against my own grain instead of with a more natural personal flow. And the fact that I felt captive and basically powerless to skip beyond the scratch-in-the-record script spinning around in my head didn’t help my cause either.

My final curtain call on Big Sky Broadway was promptly followed by a turbulent departure with little more than the clothes on my back. The subsequent 2-year intermission I endured in obscurity left no room for anything other than mind-numbing survival and life-altering retrospection, during which time I recognized that I was probably better suited to writing my own scripts and directing my own performances than I was to reacting to the manipulative directions of others as I lived out their dreams at the expense of my own.

Upon my exodus, the only parting glance the Flathead Valley got from me was in the rear view mirror when I exited off of the “pray for me, I drive 93” highway for the very last time. Yet, like all things Montana, even that backward glance was thoroughly obstructed because the backseat of my little urban-mobile was packed solid, floor to ceiling. At that point, it didn’t even matter that I’d arrived in Whitefish with a 3-bedroom household four years earlier. I believed myself lucky to escape with my life (and whatever else my little car could carry), and the emotionless exhale I eventually emitted a la Zoloft must’ve camouflaged the dull sense of relief I'm sure I felt. Something I wish the migrating flocks of ducks and geese flying in the opposite direction had been able to say.

As my world turned on its axis in 1996, it shattered most of the youthful illusions I’d once held about what my life should look like and how things were supposed to be. I guess when the drama gets old and boring, it’s time to cancel the show. Just ask the former cast of “As The World Turns”. Another approach, however, might be to simply change the channel to something more amusing, like a "Twisty Travel" Channel tour through "T T" Territory.

Coming up next, on the "T T" Channel. 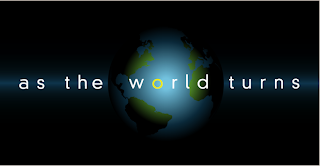