Living The Big Sky Life: The Lay Of The Land

The Whitefish I knew in 1992 had a year-round population of about 3,500 - half of the full-timers resided within a mile of the town’s main drag aptly named Central Avenue; and the rest were scattered out over the surrounding 30,000 or so acres somewhere between the sheep, cattle, hay fields and the woods. It wasn’t unusual for the resort’s population to swell to 4,500 during the summer season, especially after Brad Pitt starred in those two blockbuster films strategically staged to make Montana look so idyllic that anyone dreaming to be like Brad was seduced into selling out in order to pursue a life of fly-fishing in nature’s big sky backyard. 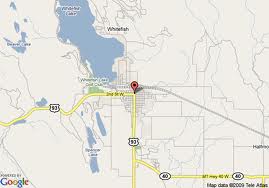 There exist certain similarities in small towns across America in my observation, and I found Whitefish to be no exception, no matter how hard it tried to reach beyond its small town status.

When driving north into splendiferous Stumptown via Highway 93 - just north of Highway 40, and past the Par 3 Golf Course-Driving Range and Jack’s Diamondback Restaurant and Casino on the east side – was the Mountain Mall, a commercial development disaster that always ran at least 70% vacant. The mall’s only saving grace in my opinion was the cineplex it housed because it was hardly worth taking your life in your hands by driving 15 miles south to Kalispell on the 2-laned “pray for me, I drive 93” just to go to the movies, particularly in the winter. Boy's Town also had its own video rental store. We did have a VCR after all, not to mention the biggest TV satellite dish known to NASA in our front yard. Whenever I'd watch that satellite dish monotonously reposition at a snail's pace with each push of the remote, I couldn't help but wonder if I was innocently beaming up otherworldly messages to infinity and beyond every time I changed the channel. It's no wonder alien abductions seem more prevalent in the outback.

Adjacent to the Mountain Mall was the Food Depot, the biggest supermarket in town. Yes, there was a Safeway in town too, it was across the street. Frankly, I’ve yet to see a small western town that didn’t have a Safeway, but for whatever reason this Safeway could never attain the popular prestige enjoyed by the Food Depot.

Next to the Safeway was the bowling alley slash pool hall slash 24-hour greasy spoon called the “Pin ‘N Cue”. It had been eloquently nicknamed the “Spin ‘N Puke” by locals because it was the only place to eat after last call when all the taverns closed down. Traditionally the 24-hour restaurant in many smaller towns is Denny’s, but Whitefish didn’t get its first Denny’s until 1994, and my young daughter got all caught up in the grand opening frenzy with the rest of the villagers who were lined up around the building at dawn to get Eggs Over My Hammy - as if she’d never been to a Denny’s before. It had certainly not been a place we went to by choice and here she was, begging me to take her to the Denny’s grand opening as if it we didn’t live with CIA Chef, the king of sauces, French cuisine and anything else she could’ve possibly wanted not cooked in lard.

Further up the road, on the very edge of in-town was the Dairy Queen, definitely a small town requisite. Sing with me: “Let’s all go to D-Q Dairy Queen! The food’s more fun at D-Q Dairy Queen. We’ll have a D-Q sandwich. Maybe two or three. The food’s just great. And what va-ri-e-ty!” And no, my daughter never worked at the Dairy Queen nor did she wear frosted lipstick (an obscure “Baby Boom” reference, sorry, couldn’t resist).

After the Dairy Queen, the “93” assumed the now-you’ve-arrived name of Spokane Avenue. While the official Highway 93 would hang a sharp left due west at 2nd Street before once again veering north outside of Whitefish on its way to Canada … just beyond the cemetery, the fancy full sized golf course, the ever elite Grouse Mountain Lodge, and Lion Mountain; it was the happenings on 3rd Street that influenced my stumped town life the most. Whitefish Title Services, the escrow/title office I managed was located at the time on 3rd Street between Spokane and Central Avenues. The famous Buffalo Café was next door; and the infamous (and formerly known as) Mountain Bank was across the street and across the alley from the Frank Lloyd Wright office building where my first title office had been located.﻿

﻿Central Avenue proudly boasted a few local landmarks such as the Bulldog Saloon (in honor of the Whitefish school mascot, the Bulldog), The Remington saloon and dance hall, the fashionably favorite Great Northern Bar and Grill, even the Black Star Brewery.﻿﻿

Central ran the length of six short blocks, yet was considered the community’s downtown hub. Many of the saloons, bars and restaurants were there; the galleries and kitschy tourist shops were there as well. The street dead-ended at the Stumptown Museum-Whitefish Depot from where Amtrak and the Burlington Northern Railroad ran regular routes. The only thing that stood between my back porch and the railroad tracks east of town were about 500 acres of hay fields littered with grazing cows. When I was at home, it somehow seemed sacrilegious for me not to stop whatever I was doing simply to savor the regular railcar processions that would glide silently across my distant landscape behind a lead engine's billowing smokestack en route to the depot.

Whitefish understandably required its own Post Office 59937; and it also had a small hospital, two small medical clinics, and the unquestionably MOWB-ish Whitefish Credit Union for which I closed loan transactions almost daily.

It was the Baker Avenue bridge that offered access to the other, resort side of the tracks, namely Whitefish Lake and Big Mountain. After Baker turned into Wisconsin Avenue, it quickly offered up a fork in the road. To the left was Lakeshore Drive, which followed the lake’s eastern shoreline until it ended abruptly at the edge of a vast forested wilderness managed by the US Forest Service, just beyond the Mary Hart/Burt Sugarman spread on the north shore. To the right went Big Mountain Road, which predictably switch-backed half way up the mountain to the ski village of Big Mountain, and the usually fogged in all winter vertigo capital of the world.

What few outsiders knew was that the town had an evening curfew and every night, at precisely 10:00pm, the curfew alarm would sound from the fire station at deafening decibels and reverberate like an echo for miles through the night skies. It turned out to be a rude, and quite symbolic, wake up call for me.

Coming up next on the “T T” Channel: Who was who in good old Boy’s Town.

Living The Big Sky LifeTM
© by DK King
Posted by DK King at 8:25 AM