All it took was one night of impartial observation while sitting alone at the bar in the Great Northern for me to put it all together. The signs had always been there, all around me. Until that night though, I’d been unable to wrap my mind with any semblance of clarity around the nudge that had regularly gnawed at the back of my consciousness. Like something wasn’t quite right, but I couldn’t quite put my finger on it. Apparently it took an hour of disconnection for me to finally make the connection.

The Great Northern Bar and Grill was a popular establishment and a happy hour hot spot (I assume it still is), and I was supposed to meet Chef there for dinner on this particular Friday night. Since I’d arrived an hour early, I opted to wait on a stool at the bar and soon became distracted with watching how hard the happy hour crowd was working to unwind from a hard week of working.

Each passing minute saw the crowds multiply, and as the music became increasingly louder to counterbalance the conversation, the deafening din rose exponentially. While I casually watched the patron revelers grow predictably relaxed and animated, thanks in part to the flow of liquid courage as many prepared for the “will I get lucky tonight?” mating ritual, it hit me like an epiphany.

In that instant I became acutely aware of just how slim the female pickins were in Boy’s Town. The odds easily saw ten Jeremiah Johnson’s wrangling for the affections of one Calamity Jane. This was contrary to anything I’d ever known, except perhaps during that ski season I spent in Vail, Colorado back in the early 80’s.

Chef and I had both grown up in “The OC” community of Huntington Beach - A/K/A “The Land of the Beautiful People” … and one of the “beautiful people” I was not. My adolescent self esteem had sustained plenty of bruises while growing up in the shadow of those “beautiful people”, where the only spotlight I ever saw was the one shining on all of my flaws. The irony was that once I moved to Whitefish, my face soon became highly recognized by the local population, yet very few actually knew me by name. I was eventually told by a friend that many of the townsfolk simply knew me as “the woman with the title company who wore the lipstick”.

That being said, I was naturally fascinated by the plain-Jane mountain mamas at the Great Northern that night who freely flirted with confidence and deflected rutting suitors as if they were Venus incarnate; when, according to the standards of my formative years in “The Land of the Beautiful People”, the embodiment of Venus they definitely were not.

I sat on that barstool as a city girl who’d unwittingly managed to snag herself one of those wannabe mountain men, and wondered if the “beautiful people” city standards I’d known all my life could ever make the translation into my big sky life. 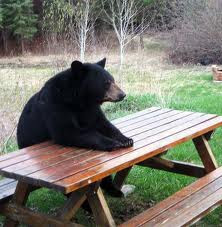 What I knew for certain was that I was no mama grizzly, and no matter how the local townsfolk perceived me on the street, I was no Bulldog with lipstick either. I also knew that I had some well-established grooming standards of my own, which included shaving my legs and armpits, waxing my eyebrows and bikini line, and regularly scheduled visits to the hair salon. And I wasn’t about to compromise my standards simply because I was living in the wild west.

Now that I was living in a cow town, however, it seemed a cowgirl hair stylist would have to be the one to do the do. Finding her was no easy task, and a true find she was. Janine and I couldn’t have been more different on the outside, but when it came to my hair, we were of one mind.

I had made it very clear to Chef from the beginning that I would not give up my hair appointments for any reason. I even went so far as to say on one occasion that he wouldn’t eat before I wouldn’t get my hair done because I wanted to make sure he understood just how serious and non-negotiable the issue was. And still is, by the way.

Women everywhere know what it’s like to feel guilted into sacrificing their personal needs, wants, and desires for the greater good of their families, and I was no exception. There came a time pre-Montana when I had to finally draw a line in the sand which no man (or child) could ever cross, and mine was a hairline. Anyone who knows me has probably heard my mantra at least once, “change your hair, change your life”. A motto I continue to live by.

No matter how many times I warned him in advance, Chef either didn’t believe me or thought he was the exception to the rule, for he became furious one night when he learned that I’d used money that he assumed would be spent at the grocery store on my hair appointment instead. As annoyingly clichéd as “I told you so” may sound, I had to remind him that I had indeed told him so. This occurred during the honeymoon period in marriage month number two, and rankled Chef’s sensibilities for the duration of our four year marriage. He never got over it, and it was invariably thrown back in my face every time we had a serious, yet completely unrelated argument.

Chef wasn’t the only one who came to learn that there were no exceptions to this commitment I’d made to myself many years before. My escrow assistant immediately understood the priorities, and knew better than to schedule a closing during the hair appointment times I’d blocked off the closing calendar.

Chef grudgingly came to passive-aggressive terms with my hard line stance on hair, and tried another approach down the road when he suggested I go “au naturel”. You know, without makeup. Are you kidding me? He defended his audacious suggestion by trying to tell me how much better I looked without makeup. Not because it was true, but because he was cheap and apparently without pride when it came to his partner's appearance. The truth was he didn’t want money that he could use for his own pursuits to be spent on something he deemed frivolous. Evidently any investment in my appearance was considered frivolous spending and a prime target for reallocation. As if I didn't produce my own hard earned income, let alone ever expect him to pay for the cost of my upkeep and maintenance.

Whoever said “When money goes out the door, love flies out the window” knew what they were talking about. In all of this, I've come to appreciate that I am my best investment, and it's up to me to preserve and protect that investment.