Chef was on the hunt for the perfect fishing hole, and had invited us to join him for the day as he explored all of the rivers that run through it. The late afternoon drive home saw me staring absentmindedly out of the car’s passenger window as our tires sped as fast as safety would allow over the dirt road shortcut he’d decided to take through the Bitterroot Valley. 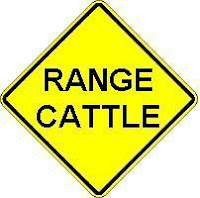 Given the huge dust clouds we couldn’t avoid leaving in our wake, I barely noticed the large yellow “Range Cattle” signs that were posted along the roadside like mile markers. It was impossible not to have my attention rudely returned to the open ranges surrounding us every time the car jerked and bumped over one of those ranch-dividing iron cattle guards set deep into the dirt road. And each time it happened, I couldn’t help but notice that in spite of all the warning signs, there wasn’t a cow in sight.

In fact, there hadn’t been a cow for miles. Where were all of the cows anyway? Frankly, I could see more cows grazing daily on the Voerman pastures bordering the backyard of my home on the range than I did on this particular day driving through prime cattle country. So when Chef finally made that turn onto Voerman Road more than an hour later, the tranquil cud-chewing herds in the northern fields before us did not disappoint.

I would be remiss were I not to also mention that the southern fields lining Voerman Road were populated by flocks of sheep as well. This is important only because of what happened next.

But first, let me offer up a little background on the subject of Montana men and their sheep. The most popular saying always seemed to be, “Montana: Where the men are men, and the sheep are scared.” Truth be told, it put an entirely new slant on the whole ‘counting sheep to fall asleep’ thing for me, especially when I witnessed so many lonely men living in a place where the female pickins are slim, and the value of a pair of Velcro gloves was never underestimated. 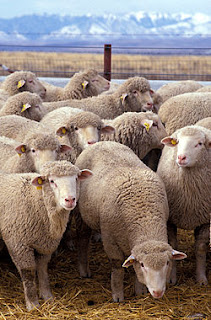 We had family friends with us in the car that day, and by the time we turned onto Voerman Road, everyone was quiet from exhaustion and more than ready to get out of the car. The silence was broken when Chef looked over at the sheep flocked together on the side of the road, and said out of the blue as he randomly pointed at several of the sheep while we were passing, “I had her, her, and her. Oh! And I had her too!”

Chef was known to have a comedic sense of timing, and did a pretty good job of bringing the group back to life. All I could say to my friends in the car at the time was what I’d been told upon my arrival in big sky country, “This is no Ireland where the sheep roam free, and the men wear Velcro gloves. This here is Montana where the men are men, and the sheep are scaa-aa-aa-aa-arr-rred.” Baa-Baa-Bulldogs.