Speaking The Same Language: Who Are “They”

WE WERE TOLD WE HAD NO POWER AND WE BELIEVED IT.

IN BELIEVING THE LIE, WE GAVE ALL OF OUR POWER AWAY.

What does this summation really mean? How does it apply to each of us? And more importantly, how can we take our power back?

All good questions and worth deep personal pondering, but I believe it’s important to lay the groundwork for future posts with a common vocabulary – a consistent way of describing some of the basics as I have come to perceive them, especially since similar words are oftentimes used by researchers to mean different things. Simply put, speaking the same language can help minimize confusion and speed the conversation up.

So I’ll start this post by first defining my interpretation of “They” thus far. When I use the word “They,” I am referring to the Master Controllers (“MC”). The MC collective is basically comprised of the secret society superpower clans commonly called the Elites, the Moneyed Globalists, the Illuminati, the Cabal, the Khazarian Mafia, the Monarchies and Bloodline Families. They barely embody two percent of our planet’s population yet They somehow control our entire world.

Their interests are not based in service to humanity but in service to self for the MC are devoted servants and direct reflections of their non-human overlords. Their harmful grand agendas and global New World Order directives come straight from these non-human overlords, and They obey their orders without compunction or impunity and usually in exchange for incontestable power and gobs of money.

I know my ‘non-human overlord’ reference above may sound a little Scientology to some but remember what I said earlier, “things that don’t appear to be connected in any way are often intricately connected.” So hold that thought for now because it’ll hopefully make more sense later on.

Now back to the MC … An effective MC tactic employed through the ages to control humanity on every level is “divide and conquer.” While the D-n-C platform used to promote some of our more notable historic conflicts will have altered over time to coincide with the mentality level of humanity at any given moment, the covert agendas are always the same. This is probably why history is always repeating itself. What this group lacks in creativity, it makes up for in recycled fear-mongering mind games.

Organized schemes regularly formulated by the MC to foment human divisiveness often involve powerful institutions with altruistic names posing as charitable do-gooders and shadow government cover ups. These institutions are frequently used to promote an impassioned need within the human psyche to take sides or choose a team, and naturally everyone wants to believe they’re on the winning team. One delusionary by-product of the “divide and conquer” scheme is a kind of phantom elitism stemming from a false sense of superiority over anyone playing on a different team. It seems to me that far-reaching damage to the heart of humanity comes from the deep-seated intolerance this form of social manipulation fosters. Intolerance creates separation, never unification.

Ordo Ab Chao, or Order Out Of Chaos - a slogan important to 33rd degree Freemasonry and another tried and true method of MC deception and manipulation - is the trick of creating chaos and then seizing power under the pretense of putting things back in order. In ancient Rome, the preferred control method was more like Panem Et Circenses, or Bread and Circuses. Roman emperors were notorious for distracting their plebian populace with gratuitous entertainment like triumph parades, heavy food and wine, and gorey Gladiator games. Gorge the people with “eat, drink and be merry” and the people will never notice that their empire has been grossly mismanaged until their homes are taken away.

The MC collective working their magic today have seen no need to reinvent the wheel. If the entertainment route was a hit in ancient Rome, it’s working in spades today … and with only a few subliminal NLP (neuro-linguistic programming) updates. The entertainment industry has been so successfully pervasive that just about every life on Earth has been influenced by it somehow. Take your pick, add your own, the list goes on and on … television, movies, theater, sex/porn, computer/video  games, sports, gambling, music, print, advertising, amusement parks, etc. 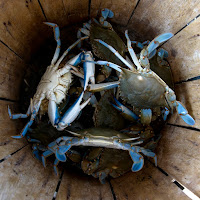 I think the best subliminal strategy They have released upon our 3-D world is the grandest seduction of all:
We were told we can be like Them and we believed it.
In believing the lie, we gave Them all of our power.

Not only were we seduced by that whopping lie, but we proceeded to take each other out while stacking the bodies on our climb to the top of the crab bucket. But the joke has always been on us because Their reward for those who manage to claw their way out of the crab bucket on the dead and damaged backs of others is a hot water landing into a boiling pot.

The truth is (unless, of course, you are one of Them), we can never be like Them. No matter how hard we work. They only want us to think we can. And let’s not forget the fact that we don’t even know who or what They truly are. Maybe if we knew the truth, we might decide we don’t really want to be like Them anyway.

So how do we get our power back? We can start by recognizing that our sense of powerlessness - as mentioned in my baby elephant allegory - has always been the figment of our well-trained minds. Universal law suggests that no one can take anything from us without our permission, but this doesn't mean we can't abdicate under deceptive auspices.

It’s our power. It has always belonged to us, to each and every one of us, individually and collectively. If you want your power back, then take it back. Say it out loud if it helps. “It’s my power, it belongs to me and I call it back to me now and forever!”

After reclaiming your birth right, please consider further empowering yourself with knowledge of your true history; do your research, get educated for real, and be personally accountable along the way.

Email ThisBlogThis!Share to TwitterShare to FacebookShare to Pinterest
Labels: Definitions, The Big Lie