Then Along Came The Tall Whites

If you had asked me prior to 2012 and The Galactic Transcripts what I thought about ETs and UFOs, my response would’ve been the equivalent of an “eh” and a shrug because I never gave the subject much thought. Not because I ever bought the official line of denial on the matter or the story about homo sapien sapien being the epitome of soul-bearing lifeforms in the known Universe.

No. But because it was always a given in my mind they were out there … even if all I had was an unsubstantiated knowingness.

That, and the oblique fact that (and many ETs would agree) it made absolutely no logical sense to me that the only intelligent lifeform in an expanding Universe (and on this planet I might add) would be the human being. The manipulative notion purporting our Earth human to be the smartest thing around any planetary block in the galaxy always seemed naught but ignorant and arrogant - especially when considering that even establishment scientists are now estimating there are more than two hundred trillion galaxies outside of our own Milky Way.

Let me further clarify that I do not consider myself an ET abductee or ‘experiencer’. If I have ever been abducted, I have no conscious memory of it. But I need to remind those who do not fully understand how things behind the curtain really work that just because we don’t remember something happening doesn’t mean it didn’t happen. Let me offer some bits of friendly advice: Never rule anything out, and never say never.

Suffice it to say, I wasn’t one of those souls who grew up staring at the stars wishing for a UFO to whiz by and beam me up. This doesn’t mean I haven’t seen a UFO for indeed I have, and several. However, given the cloaked traffic jams in our skies these days, seeing a UFO doesn’t necessarily mean it’s an ET alien aircraft. And frankly at this stage, I don't have the training to know the difference.

It is common knowledge among historians and researchers alike that technologically advanced aircraft and devices were being reversed engineered and developed in secret by Nazi German scientists during World War II. Project Paperclip absorbed those scientists and all of that research into western Allied intelligence labs after the war ended. Did anyone really think They would let that kind of space age R&D go down with the Nazi ship that never really went down?

After more than 75 years of unfettered advancements, we can only imagine how far this research has progressed in secret. When our hand-held technology today is compared to what has been in clandestine use by our secret space program for decades, the declarations made by many a whistleblower becomes irrefutable – we are not nearly as advanced as we think. In other words, those impressive black triangular UFOs seen in our skies since the 1960s are synonymous with aerospace industry covered wagons.

All said, what became apparent to me early on was that The Galactic Transcripts somehow gave substance to what I had always internally known. Whatever else it opened up was more than enough to ensure I would not rest until I knew more, a lot more. When the questions started pouring into my head without interruption, I did what most of us do these days, I scoured the internet for enlightenment. 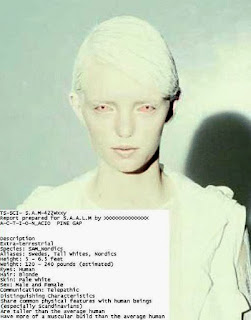 My unregimented research began where I suspect many newbies begin - Roswell, New Mexico and the 1947 crash of an alien aircraft, oh I mean weather balloon. I didn’t dwell too long on the details of the Roswell crash because I found the blatant cover up a bore and the subject has been dissected to death by every expert and then some. Until further information comes to light about the Roswell incident, I thought it best to set it aside while diversifying my investigation. I had a daily array of questions in need of fresh answers.

This is when I discovered Charles Hall and the Tall Whites. He was the first experiencer on my list who was still alive and giving lectures with his wife by his side. His personal story about the private time he had spent with the Tall Whites in the Nevada desert while in the military was hard to dismiss. Perhaps because I knew inside he spoke truth. Yet, I was left wondering why his story wasn’t common knowledge. Why wasn’t it out there being discussed by everyone?

For whatever reason, They chose not to completely suppress the Charles Hall story. For this I am glad because it doesn't usually work that way. It seems pretty obvious to me now how They tasked Their ruthless MIB henchmen eons ago with ensuring that the people of Earth never, ever get the truth, the whole truth and nothing but the truth.